Possum Magic is a great story to purchase if you want to explore the Australian bush with your child/class. I had never heard of it until my friend Brooke brought it from New South Wales to me. She even got us a cute cuddly possum too!! 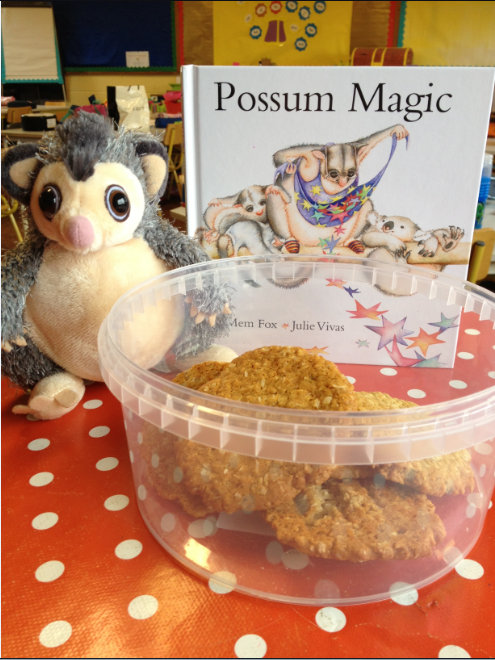 Here’s a synopsis of the Possum Magic from bookdespository.co.uk:

“Grandma Poss makes bush magic. And her best trick of all is making Hush invisible. Now Hush will truly be safe from snakes.But one day Hush wants to become visible again. Grandma Poss looks and looks, but she can’t find the right magic. Then she remembers. It’s something to do with food! People food–not possum food. So the two set off on what becomes a fascination culinary tour of the cities of Australia to find the magic that will make Hush visible again.”

Possum Magic has been a real voyage of discovery for all of us. We all seem to have an Australian connection these days. My brother works in Onslow, Perth and knows all about protecting the bush and its indigenous wildlife. Lots of my pupils have family members in Australia also. I even have one pupil who lived there a few years ago.

Aside from the Koala  no bush animals were recognised by my pupils. I have to admit that I could identify the animals but not so much the foods! Well pavlova and steak were fine but of the others the only two that I had ever heard of were anzac biscuits and Lamingtons. Of those the only one that I had tasted was the Anzac biscuits. A very nice Australian Mom brought some to school for my class a long, long time ago. I think that I taught her child in Junior Infants and she is in 5th now! Anyway, I did some research and made my very own anzac biscuits for my class today. Click here if you are feeling the urge to make some 😉 Anyone know anything about lamingtons ?!

Any other suggestions of books that would allow us to explore other countries in a fun way? I would love to hear your suggestions.

Notes to the teacher: